At the end of the 1915 Gallipoli campaign during World War 1, this soldier saved thousands of lives with his one simple invention that managed to deceive the enemy soldiers…
In this STEM-rich practical activity, students will design and build a contraption that emulates his amazing ingenuity.
Basically, they have to design a contraption that automatically bursts a balloon after a small time delay (it’s probably not a good idea to do it with actual rifles).
The Task.

My students often tell me that this is the best activity that they have ever done in school. If you’re looking for a hands-on practical activity that will bring out your students’ technical creativity in a big way, but which is easy to run in a Science room, you have to check it out!!

Watch the Teacher Guide on Vimeo on Demand. It contains lots of examples of the amazing contraptions that students have designed and built over the years and it gives teachers who want to run this activity plenty of tips.

The Historical Background. (Yes, this prac requires some historical background!!) 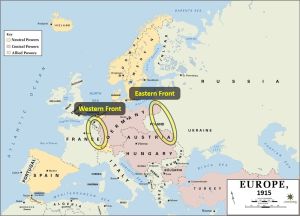 World War 1 lasted from 1914 to 1918 and up until that time had been the bloodiest war in history. It was centered in Europe but armed conflicts occurred worldwide.
Germany and the Austrian-Hungarian Empire were fighting the British and the French on the so called Western Front and they were fighting the Russians on the so-called Eastern front.
Turkey decided to join with Germany and attacked Russia and Ukraine from the south.

Russia asked Britain and France for help but to reach Russian ports in the Black Sea with supplies, British and French ships had to travel up through the Straits of the Dardanelles into the Sea of Marmara and then up past Constantinople, the capital of Turkey, which the Turks now call Istanbul.
However, this was impossible because the Turks had placed cannons along the entrance to the Straits, so that if any ship tried to sail in, it could be blasted out of the water.

British, French, Irish, Indian and Canadian soldiers, along with the Australian and New Zealand Army Corps (the ANZACs), decided to land on the Gallipoli Peninsula and take over the cannon positions. The plan was to then send a naval fleet to Constantinople and knock Turkey out of the war.
However, the military campaign was a complete disaster from our point of view. The beaches where the soldiers landed on April 25th, 1915, what we now call ANZAC day had a series of hills behind it. With the ANZACs on the low ground and the Turkish army up in the hills, it was hard for the ANZACs to gain much ground. After 8 long months, and after tens of thousands of soldiers on both sides died, the ANZACs decided to withdraw.
Now the problem with withdrawing from a battle is that if the enemy army realizes that you’re withdrawing and that you’re packing away all your cannons and guns and stuff, and that there are fewer soldiers left to fight, then they typically launch an attack which leads to even more casualties. So how could the ANZACs withdraw without letting the Turkish army know that they were withdrawing?

Enter Lance Corporal William Scurry. Scurry, an Australian soldier born in Melbourne, came up with a way of firing a rifle automatically, long after the soldiers had left. He called it the drip rifle. Basically, a can was tied with a string to the trigger of a rifle and another can was placed above the first can. The top can was filled with water but a small hole in it allowed the water to drip into the bottom can. This can got heavier and heavier and eventually pulled on the trigger with enough force to discharge the rifle.
So, a large number of these drip rifles were set up, and while the ANZACs were escaping under the cover of night, the Turkish soldiers thought that they were being shot at. All night long the guns were going off randomly, BANG, BANG, Bang Bang. It was the only time in history that an army was able to retreat from a battle without a single casualty.
Before Scurry came up with his idea, it had been estimated by the commanders at the time that of the 80,000 soldiers at Gallipoli, some 30,000 or so would die during the retreat, but in the end, no-one did. The ANZACs also used other tactics that were intended to deceive the Turkish army, but it’s the drip rifle that we’re interested in today! 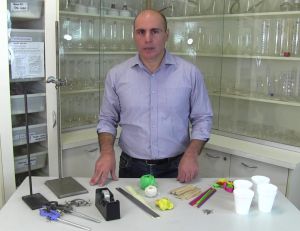 Which brings us to the task. In this activity, students work in groups of two or three to design and build a contraption that automatically bursts a balloon.
Using retorts stands, boss heads, clamps, string, polystyrene cups, sticky tape, plasticine, icy-pole sticks, rulers and/or anything else you can find, you have to build your contraption, pour water into the cup that has a hole in it and then stand back. The contraption should then do the rest and pop the balloon after let’s say about 15 to 30 seconds. We don’t want to wait overnight. 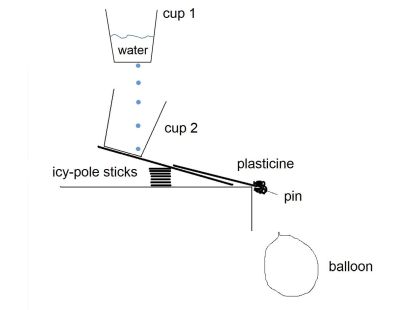 To get students going, the instructions video shows an unreliable design (which I encourage students not to use) and then lays out some rules and tips.

STEM (the E is for Engineering) and Practical Activities

There are many different types of practical activities that we do in our classrooms. Some are mostly observational (for example, students mix two chemicals and observe the chemical reaction that takes place) and some involve simple measurements (for example, students calculate their typical walking speed by measuring the time it takes them to walk ten metres). A more complicated prac type involves asking the students to determine how one variable (for example, the amount of light) affects another variable (in this case, the rate of photosynthesis). All other variables have to be kept the same so that at the end we can say for sure how (or whether) one variable affects another. These kinds of pracs typically involve making a hypothesis and then testing that hypothesis. They are usually teacher-directed (although there is an increasing emphasis on asking students to design their own experiments).

The Gallipoli Balloon Burster activity is quite different because students are asked to actually design and build a contraption that has a specific practical purpose. Using their existing knowledge of motion and forces, they have to imagine a contraption and then imagine the chain of events that will take place as water flows from one cup to the other in their contraption and how the pin or the balloon will move. They produce a hypothesis in their minds. They then test that hypothesis and if the results are unexpected (they often are) and the contraption doesn’t operate quite the way that they thought it would, the students then have to adjust the variables available to them until they get the result that they want: a working, water-clock-powered balloon burster!

Real engineers and inventors work the same way. Every “device” that has ever been invented from light bulbs to lunar landers had to be imagined, built according to existing knowledge, tested, redesigned, rebuilt, retested, and ultimately improved to the point where the device worked consistently and worked well.
The Gallipoli Balloon Burster activity introduces students to this basic design process and gives them enormous satisfaction when their device successfully achieves its purpose.

Good luck with it. Please feel free to send photos of the contraptions that are built.