In these activities, students investigate how a range of different objects (including themselves) move.

You can, of course, just use the data to draw a graph on paper as well!!

Analyzing Your Own 100-metre Sprint

This activity blends Physics and PE. Ten-metre-interval split times are recorded for a sprinter running a 100-metre race and, from the data, an analysis is made of the sprinter’s performance. Choose the prac that suits you best: 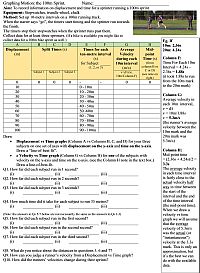 Graphing Motion: the 100m Sprint: In this prac, students analyse their own 100m sprints using Displacement vs Time graphs AND Velocity vs Time graphs. 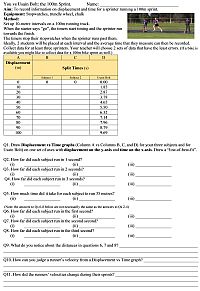 You vs Usain Bolt in a 100m Sprint: This prac looks only at Displacement vs Time graphs and asks students to compare their sprint performances with Usain Bolt’s (when he ran his 2008 then-world-record sprint).

Graphing Motion: the 100m Sprint (Displacement vs Time only): This prac is the same as the previous prac but no reference is made to Usain Bolt. 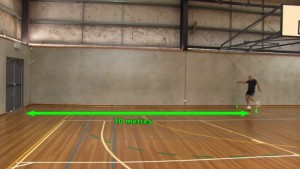 How Fast Can You Kick a Ball?

This activity also blends Physics and PE. A ball is kicked (or thrown) 10 metres. The action is recorded and the video file is analysed using Quicktime, VLC, or Windows Media Player. (See Usain Bolt vs Spiro Liacos for more details.)
Calculating Throwing and Kicking Speed 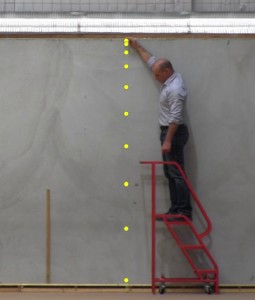 At What Rate Does a Falling Golf Ball Accelerate?

This activity also requires the use of Quicktime or other software that allows frame-by-frame forwarding. A ball is dropped, the motion is recorded and the video file is analysed. Don’t forget to Include a metre-ruler in the shot!

Vertical Motion: Analysing the Motion of a Falling Golf Ball (25 frames per second)

Projectile Motion: Oblique Projection (30 frames per second) This activity is similar to the Vertical Motion activity above but is more advanced. 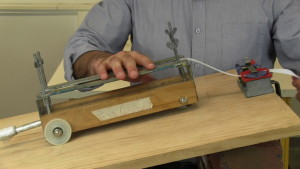 This activity, as the name suggests, introduces students to ticker timers. 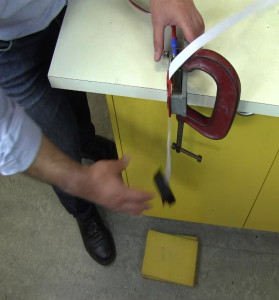 How Quickly Does a Falling 1kg Mass Accelerate?

In this activity, students calculate the acceleration of a falling object.

Acceleration Due To Gravity: Ticker Timers